A nightie that fits. I have never tried on night attire I liked – ever, its probably the bralessness of it all. So I usually succumb to the inevitable oversized T shirt for bed. Its been so hot of late, I have become desperate for something cool but flattering to sleep in. Oh and it must fulfil one other criteria – not ‘see through’ lest 20yo catch a glimpse and die of fright.

This pattern started life as a vintage Style 1462 circa 1976 . I recall the pattern came from my husband’s Grandmar’s (sic) stack of sewing supplies. The pattern was a size 16 and she would have made it for my mother in law. My mother in law has never been a size 16 in her life – she’s a petite but buxom lady of about 1.55m (in keeping with my newly penned metric policy). When I realised it was a size 16, probably bought to accommodate my M-I-L’s generous bosom, I sacrificed a quickunpick at the alter of the internet sewing gods. I mean where on earth would Grandmar have found all the info which I have at my fingertips. Internet assisted full bust adjustments (FBAs) unheard of. How did she work out from first principles how to fit a generous cup size from a pattern drafted for a 70’s B cup? So yay for the internet.

Naturally I made about a bazillion alterations to this pattern including drafting the itty bitty titty dart into a princess seamline. So much easier for fitting generous bosoms. Hey, it only took 4 toiles, not bad for me to be honest. And “yes” I’m wearing a bra in these photos, the world is just not ready for the girls to be unleashed! I created a back bodice for shirring ease and changed the shape of the cups so that the straps would cover my bra straps. Not that one intends to wear one’s brassiere to bed you understand. But when this is made into a dandy formal number, present Lesley will be appreciative of past Lesley’s forethought!

The back bodice was originally very generous, so I subtracted that generosity, then added it back (about 6cm) for the shirring so that my nightie could make it over my hips/shoulders. No need for the awkward zip in a nightie scenario – gosh doesn’t that sound risqué? I also left a bit of ease in the underboob area and sewed a little elastic under there to pull the nightie in for comfort (actually to halt the southward decent of said boobs). That was a little idea I stole from my daughter’s Billabong dress – just elastic sewn into the existing seam allowance – who woulda thunk?! 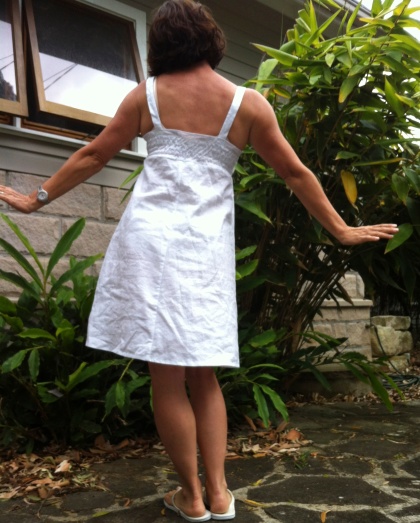 There looks to be a bit of drape in the CF where the skirt hits the bodice. That’s my fault, I made a more pointy upward curve CF underbust and just couldn’t manage to sew it in this quite robust linen. Apologies for the grainy photo.

The CF French seam added to the bulk. I’ve since lowered that point in the final pattern draft and made the curve less radical. I feel sure that should fix the CF drape. Ooooh, that could be a decent addition if one was pregnant or had an extra large helping of pudding at Christmas though! This alteration will be known hereafter as the generous belly alteration.

Oh the possibilities are endless for this baby. I can take in the underboob with a slash and overlap and make a luvverley fitted evening maxi in brocade a la 1960s/1970s. Or what about a nice little broderie anglaise sundress for our hot Christmas weather? Perhaps a 2nd in Hawaiian print? Don’t you just hate thongs BTW? Really not a fan but I wasn’t at home and my glass slippers were in for repair!

Revelation – you gotta have belief in the process of patternmaking. You know when you have a feeling you need to take in a dart here, a puddle there? Then you take it to the paper and make happy with the scissors and sticky tape – lo and behold the next toile is just that much better than its predecessor!

Any suggestions for this pattern hack gratefully received.