This is written in response to a post by Kate of Fit and Flare regarding gendered children’s wear. It got me thinking – all week. Here’s her thoughtful argument. I don’t entirely disagree with Kate, but this topic has hijacked my mental space long enough and seeing as I have something junior to show you – its time to clear my brain. This subject deserves a blog all to itself, so this is my much abridged diatribe!   I was not one to slavishly dress my kiddos in blue or pink, partly because Princess looked horrible in baby pink but looked terrifically edgy in a black onesie covered in Scotty dogs – previously her brother’s. It wasn’t a non-gendered clothing intention, it just happened that way. No one batted an eyelid when I dressed my little girl in baby blue, navy blue or black. She often wore her brother’s hand me down shorts, track pants, dungarees. She was a very cool tomboy and still is.

I’m wondering what the response would be though, had I had dressed my son in dresses? What if I took him out shopping in leggings (whoops, I think I did), visited the park in T shirts adorned with fairies? Its generally considered ok for girls to dress as boys, it can even be seen as empowering, young feminists in the making; but if boys dress as girls – all hell breaks loose – our sons will be gay. So it got me thinking, who really is the victim of gender bias here?   This Wikipedia article points to all manner of influences contributing to children’s perceived gender choices and their subsequent expression. I think we’re all aware of how influential TV can be on kids, we need more positive role models for pre school girls. Males are more often portrayed in the lead role in pre schooler programming even in seemingly non-gendered programs like Teletubbies and Barney. The author of the wiki labels ‘Barney’ a feminised male, because he leads in a caring way. I take exception to this description. If males are ‘caring’ do they have to be affeminate or feminized? Can’t we just have caring blokes who are blokes AND caring? As if being purple isn’t difficult enough, Barney just can’t win.   Here’s something from the same wiki. I’m sure most of us have observed in kids… its other children that are most likely to point out inappropriate gender activities. Phew, that absolves us parents and ‘society’ as no.1 peddlers of gender bias in our kids or does it? “Same-sex peers acted as the distributors of both rewards for proper gender role behavior and punishments for improper gender role behavior. Boys who preferred to play with dolls rather than trucks were five to six times more likely to be harassed by their peers than those who conformed to the norm. Girls who preferred to play firefighter rather than nurse were ignored rather than criticized. “ Interestingly, the more egalitarian the parent, the less gender difference noted in their kid’s behaviour – so parents do have a major influence on how their kids express their gender. Gender bias possessed by parents – blue jobs vs pink jobs, masculine behaviour models vs feminine models – in turn dictate how they dress their little ones. But does dressing boys as girls and vice versa make any difference in the long run? Perhaps not. There is an inherent understanding of which gender camp we are born into. Not all of course, some little humans are gender confused from the beginning. This ABC doco is the story of Isabelle who started life as a boy, but told her parents she doesn’t wish to live her life as a boy – she lives as a girl – age 11. This child is smart, articulate and brave, an excellent piece of journalism, do have a look. Gender identification by colour became common after WW1 – at which time boys wore designated pink and girls blue!!! What the? Prior to WW1 all kids wore white until age 6. The rise of the women’s liberation movement in the 70s made gendered clothing for girls unpopular, blue overalls were in. The 80s brought a backlash against that and gendered clothing became more popular again. The author of this article attributes our increasing obsession with gender on prenatal tests. Parents now know (for the most part) the gender of their kids in utero – so they buy and decorate the nursery accordingly. Retailers benefit, so the practice is encouraged. Speaking of retailers – is nothing sacred – our kids bodies (and ours for that matter) are advertising space for sale, hence the ubiquity of Dora and Wiggles and all manner of logos, emblems and slogans. And we pay THEM for the privilege to advertise their product! Sick and tired of this very thing my darling Sis’ in the UK requested I make nighties for my 8yo niece’s birthday. 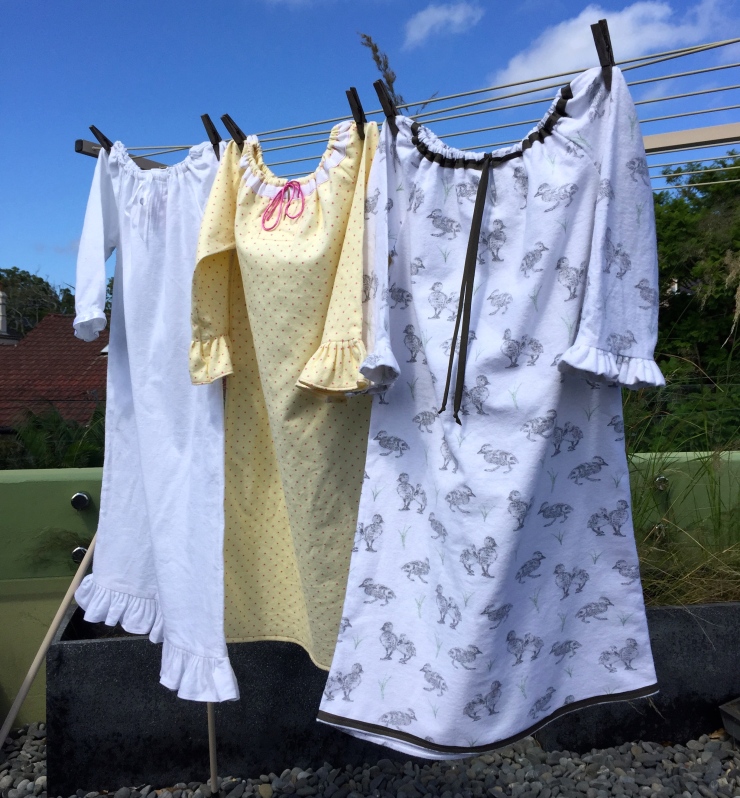 Its a bold statement but clothing wise, my opinion is that boys suffer much more from gender bias than girls. This article found that 80 undergraduates were more likely to view the ‘sissie’ pejorative as negative while ‘tomboys’ were viewed more favourably. The prevailing wisdom being that tomboys will likely grow out of it, while sissies may possibly become homosexual. Interesting how we don’t project lesbianism on ‘tomboy’ girls, but little boys need to be rough and tumble lest they become gay men. Which is pretty silly really when you consider parents of gay men often notice their boys are more effeminate in their early childhood, all the dressing in blue dungarees in the world is unlikely to change that. We speak to our kids about gender being a continuum – its a useful model.   I recently made my lovely friend Mary aka Dodgy Zebra 2 x muslins wraps for her twins currently gestating. I can tell you she looks fabulous and although I have no idea what gender she is carrying, because she looks so great I suspect one at least is a girl – there is a scientific reason (another time perhaps). I debated long and hard about what colour to machine embroider ‘thing 1’ and ‘thing 2’ on the muslins. I settled on lilac so as not to offend. It has become such an entrenched thought process whether to buy pink or blue – a social moré if you will, that to challenge that just seems a bit ‘try hard’ to me sometimes. But, perhaps the pink/blue dichotomy is a convenient shorthand for new parents, influenced by whats available in retail. Understandably retailers would prefer you buy another truckload of gear for your 2nd baby rather than recycle the non-gendered stuff you might already have. Commerce keeps the wheels grinding?. God, how many times are you asked whether its a girl or a boy when you have a newborn?  Maaaaaate, the parents have had little to no sleep for 3 months, they can barely make conversation, you can see whats in the pram because its colour coded!     I have a penchant for all things white for babies. My babies wore lots of white, it can all be washed together,  the colours don’t run – its pretty easy. I am well aware that white conveys purity and innocence and that is most definitely something I associate with newborns. If there is one thing I would wave my magic wand and wish for a newborn baby – its protection.   My other suggestion for children’s clothing. When sending your kids for sleepovers, please make sure their night attire is modest – please oh please. No Lolitaesque gossamer nighties slipping off their prepubescent shoulders and yes, its a cruel world – gender bias is a bitch, but above all, keep our kids safe. You’d think that would be common sense – but apparently not.