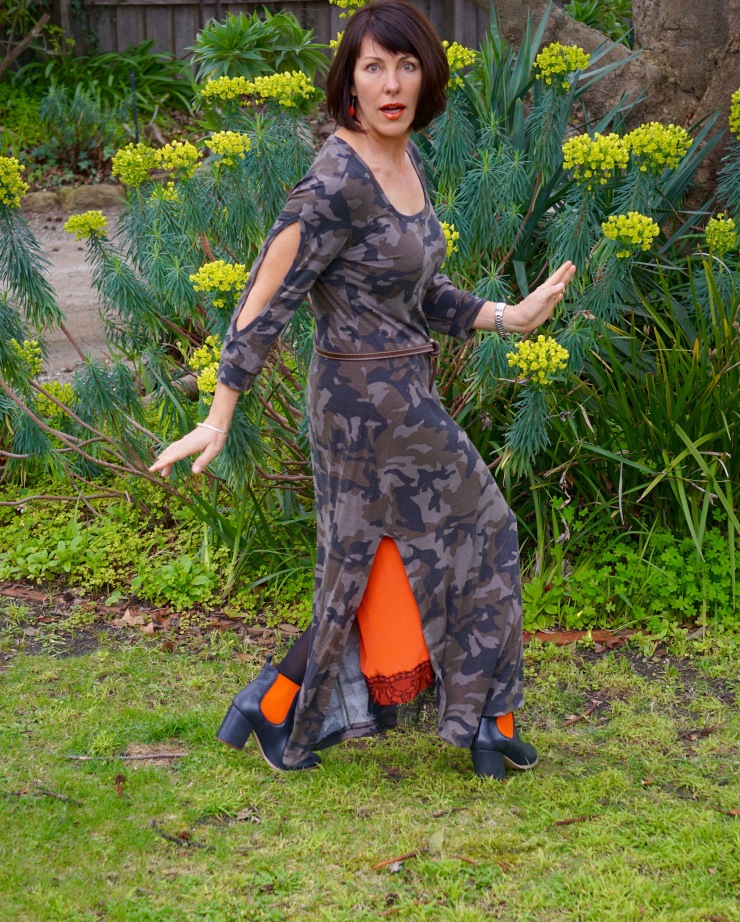 You might recall the Hump(ing) Back Whales nightie – a toile for this camo dress. My goal while I’m here in Geelong is to ‘get good’ at patternmaking. That can’t be done without toiles unfortunately – lots of toiles! The thing I hate most about toiles is the wasted fabric, so the nightie was a good compromise.

I was talking with my co-learners at college yesterday; most of whom are industry patternmakers (that’s not intimidating at all!!). One of them worked as a patternmaker for one of our top Aussie labels – high end clothing. I asked how many toiles she would likely make for a design. She said it depended on the garment. These are notes from various discussions – ‘Inch High Private Eye’ style cos I haven’t obtained permission to reprint these discussions. I don’t want them to know about my blog – blogs get a lot of flack at college!

I find these discussions really fascinating. We ‘home sewists’ seem to expect we can go from the envelope to a great garment in 1 step and I think that really stops us ‘getting good’. I can not/will not, wear something I don’t think is as good as high-end store bought – unless I’m really desperate. I donate most of what I make, though that seems to be slowing. If all I’m producing is low-end chain store garments – then I might as well save myself the effort and shop at Supré. I suppose that doesn’t scratch the ‘wanna be making something’ itch though, does it? I guess it depends on your own expectations for your making and I in no way judge anyone for that. Honestly, for what I’ve spent on sewing education, fabric and machines I could have a stupendous store bought wardrobe by now! But that wouldn’t scratch the creative itch for me!

Back to the Camo Dress…

Here is the camo dress with saddle shoulder. I’m smitten with this shoulder treatment. Not sure why, but I have always had a ‘thang’ for camo and khaki. In the 80s/early 90s.  I trawled army surplus and wore 1 pair of camo trousers loosely slung about my hips and folded up to jodhpur length almost exclusively! Yay for cheap sturdy student clothing!

When I spotted this camo print in The Fabric Store (rayon spandex?) it had to be mine! The shoulder derived from thoughts of epaulettes, I was toying with militaresque, but my schedule wouldn’t allow too much fiddling to be honest. The split sleeve was an attempt to move away from something that reminds me of a nightie! Stretch garments are my instant gratification; this stretch block has been used soooo many times. Others in my household don’t see camo in the same light. One inhabitant of our abode uttered “camo eurgggh” on seeing me tweaking fit in the mirror. My Princess would never say that; she knows better than to push my sensitive ego, toward the end of a self drafted project! Designing your own clothes really puts your ‘art’ out there and I’m not confident enough in my abilities to invite criticism. Not after days of slaving over a design I liked.

Inspired by new orange elastic sided boots I made an orange silk slip (stash buster!) and Princess suggested I use some gorgeous eyelash lace she’d bought online from China. The postage cost more than the lace apparently! I’m not altogether sure I like the orange slip and orange sided boots together – perhaps they’re too literal? Yesterday, I wore this dress to college with white Converse sneakers and a little bronzer on my legs (to cover the veins mostly!), topped off with a khaki long line cardi. This maxi style is good for airflow about the legs, and bonus – the swishing skirt makes blue veins harder to see! 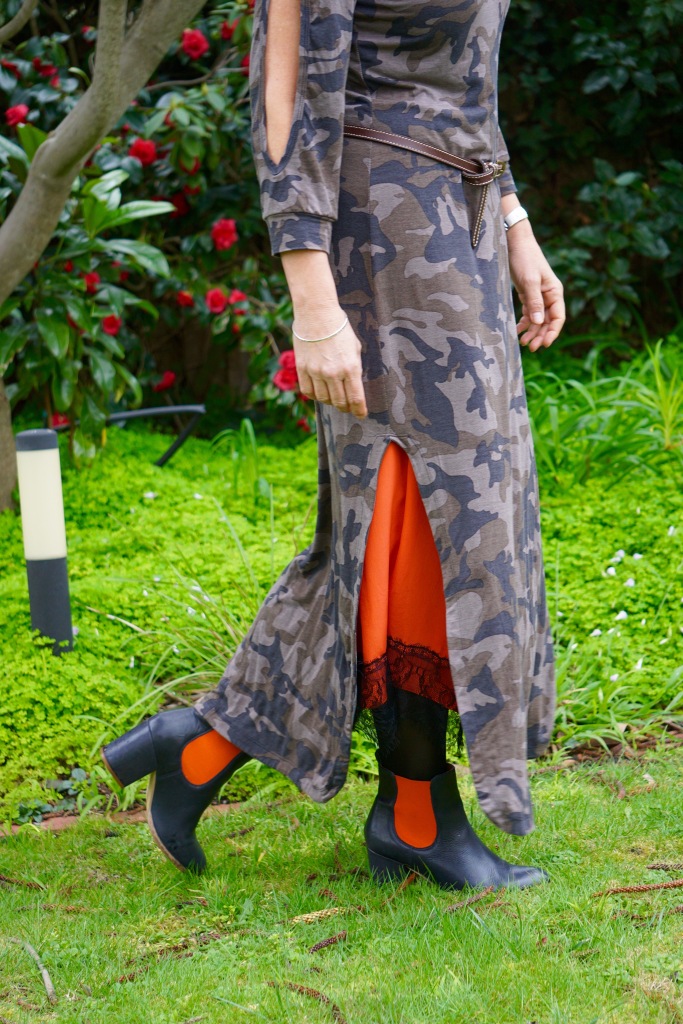 A contrast fabric would show off the saddle shoulder even better. Its tempting to make another of these in something less contentious than camo, but my sewing ‘to do list’ is growing longer with Princess’ high school formal in 2 weeks. She’ll be sporting the ‘Emperor’s New Clothes’ if I don’t get a wiggle on!

Stretch block, Back as Front (no dart)

CB seam for back shaping

Next time, interface shaped hem facing to stop torquing at corners and notch (for the luvva God) – not happy with the top of the split finish, a difficult curve to negotiate with a coverstitch machine! Split length is good. WINNER!